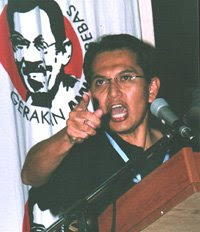 Ezam Mohd Noor is a fighter. He was incarcerated, separated from his family; and during the height of Reformasi he even had to hide in Indonesia with Abdul Rahim Ghouse to continue the fight against BN and UMNO.

Sources say that his move to join UMNO was pre-planned by none other that Pakatan Rakyat (PR) themselves. After engineering Ezam's move to obscure himself from the political limelight, Ezam is now accepted as being outside PR by BN members. This was very difficult seeing his tirade as the PKR Youth Chief - equivalent to a Vice President in terms of party seniority.

Pakatan Rakyat, after taking comfort from being accepted by BN as 'not being from PR' after not contesting in the General Elections the next logical move is now to hop onto the BN bandwagon and start the spreading of the 'PR Virus Version1' into the BN directly. This is after seeing that the government is more liberal and with Zaid Ibrahim as the De-Facto Law Minister, Ezam's message of anti-corruption would be better accepted.

However he will continue to fight graft and corruption but will nonetheless say that it is easier to enforce by joining the system as what Dato' Seri Anwar Ibrahim has tried, albeit unsuccessfully, to do before.

Best of luck to Saudara Ezam.

http://puterabatu.blogspot.com/
Posted by Tukang Cerita at 10:52 AM

Promote your Page too