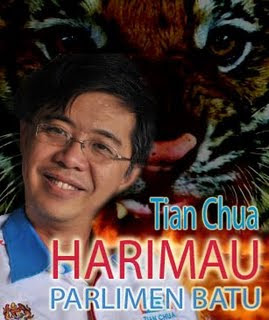 I sincerely apologise for not being able to blog for some time now. With the sudden upsurge in work I have not been able to blog with the consistency that I would like to have.

Anyway I would like to touch on the issue of my ex-boss Tian Chua's indictment of criminally injuring a police officer by biting his hand. Unfortunately the sentence was meted out by a junior of mine who was a very high scorer in exams.

Too bad that in the real life, such academic performances does not guarantee an inkling that one will deliver correct judgments, which is the current case.

The Magistrate passed a guilty verdict on Tian Chua based on circumstancial evidence. No direct evidence was tendered to show that Tian actually bit the officer's hand, but direct evidence was shown that the police did assault Tian including punching and roughing him up.

Not only the learned Magistrate choose to ignore this apparent admission by the police officer, he was given praises for being truthful and on this basis, his admission was accepted as the truth. Whe the double standards? is the Judiciary that nonchalant as to having its consistency questioned?

I will give you a perfect example. In the case of Dato' Seri Anwar Ibrahim, he was given a sentence that was to be served consecutively instead of concurrently as he was a 'national leader' and he 'had to learn his lesson'; but the ex-Police Chief that was found guilty of punching Anwar was given a commuted sentence based on his 'contributions and dedication to the country'.

I have heard news from my lawyer friends and associates that this Magistrate was recently promoted to a new job, a 'special assistant' to a High Court Judge that liaises with the Ministries. I also heard that he has recently bought himself a new home nearby in Sri Hartamas. Granted, these may be hearsay at best, but the thought that these events happen almost at the same time give rise to a multitude of questions!

However, I am one who believe that a silly judgment made by this silly Magistrate cannot be hidden by any effort whatsoever. The sheer ignorance of this silly Magistrate - who used the burden of proof (based on a balance of probabilities) used in a civil case to a criminal case (which needs to be proven beyond reasonable doubt) will be overuled and overturned at the appeals stage. For that I am confident. For I believe that Malaysia's judiciary cannot be more rotten that it is now, after the country passed a 'no further action' judgment against the corruption case of VK Linggam.

Then again, I may be proved wrong!

No matter how hard UMNO and BN will try, the people in Batu (where Samy Vellu happen to stay!) will always hold Tian dear to their hearts. He has proven it time and again, that the Tiger of Batu will stay where he is loved. Any efforts to remove him will prove futile - much to the chagrin of Lim Si Pin!

Posted by Angkatan Muda Keadilan BATU at 2:33 AM

Promote your Page too